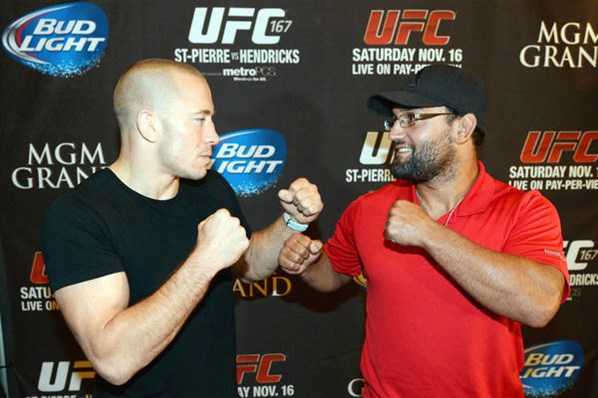 UFC welterweight champion Georges St Pierre is busily preparing to defend his title against Johnny “Big Rig” Hendricks at UFC 167 and has employed the service of K-1 veteran John Wayne Parr. GSP is one of my favourite MMA fighters as he is always looking to improve his skill set and is very down to earth and humble. He has picked a great Muay Thai coach in John Wayne Parr. I have watched John Wayne Parr compete in K-1 but it was his time in “The Contender: Muay Thai” which I was impressed with as he showed great character and honour as well as great skill and toughness. Here is a video of John Wayne Parr holding pads for GSP.

The video shows John Wayne Parr giving GSP some striking tips mainly on GSP’s use of combinations including knees and elbows with GSP throwing many round kicks, front teeps and even a spinning back kick. However I would like to see GSP working more on how to counter the big left hand of Johhny “Big Rig” Hendricks and Johnny is also not known for throwing many kicks either. I am sure the champ knows what he is doing and I for one will be looking forward to UFC 167 and will be rooting for GSP all the way.